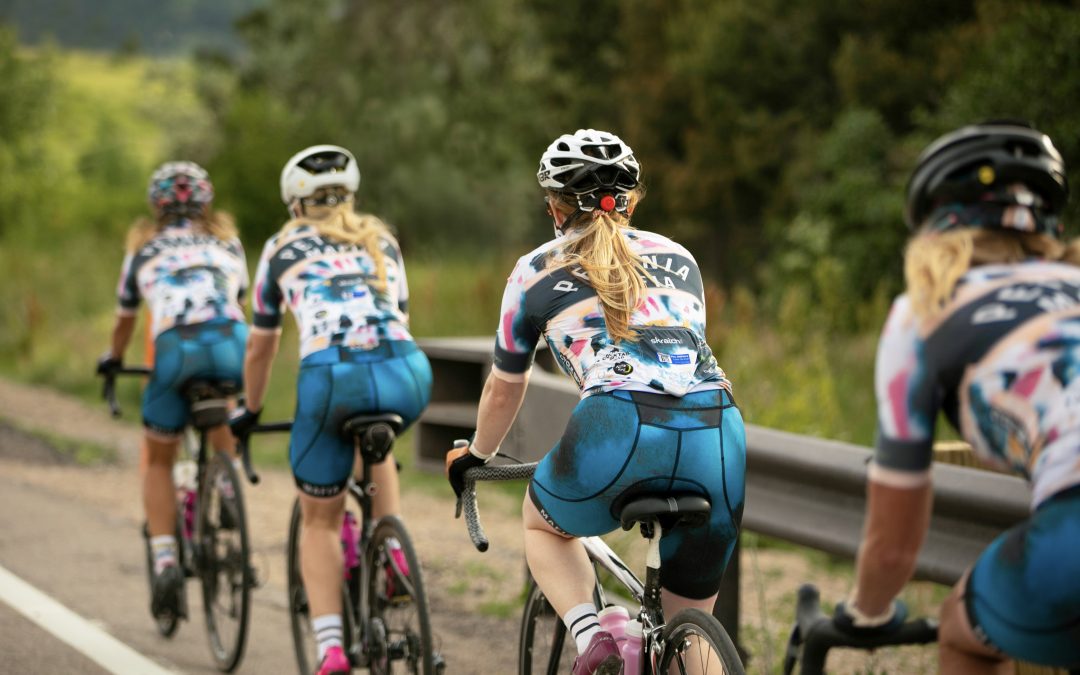 For years, women have been underrepresented in the world of cycling. Sexism and gender oppression are among some of the barriers women face in trying to seek out cycling groups.

There are women-led groups out there who are shaking things up and creating safe spaces for women to be active, build relationships, and be a part of a cycling community. Enter: Petunia Mafia!

We spoke with the founder of Petunia Mafia, a club for women cyclists. Patty Nilsen gives us the scoop on how she got started, how she stays motivated in her work, and what she looks forward to for 2022.

Founded in fashion and enamored with all things cycling, our team has become a positive force in women’s cycling. The Petunia Mafia story starts with our founder’s innovative vision of what a women’s bike team should be. 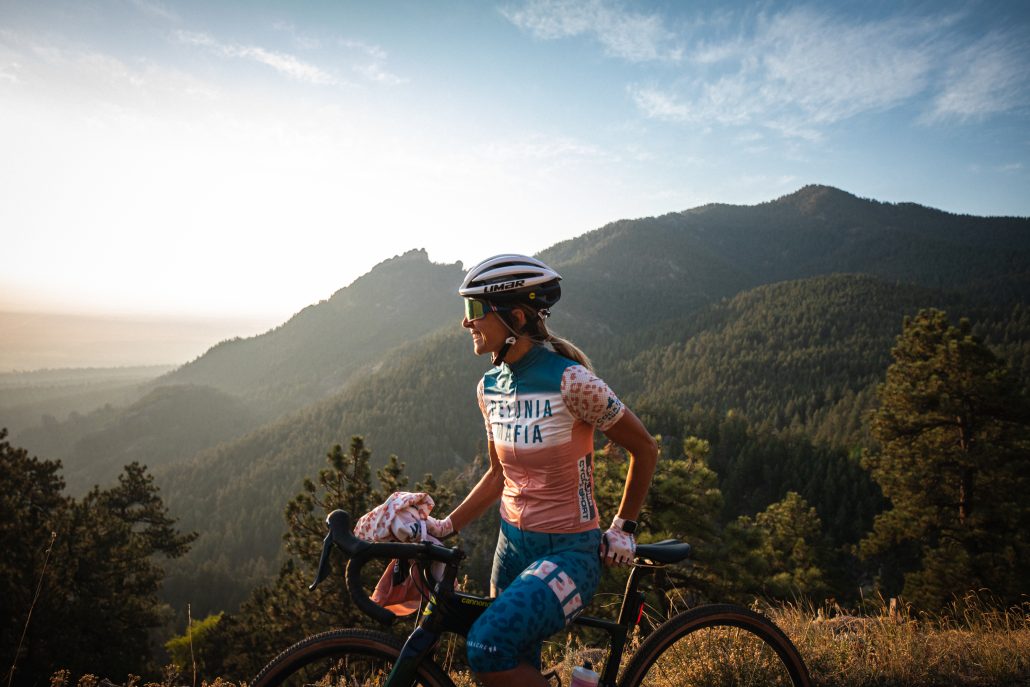 While she had the credentials to join one of Boulder’s many cycling teams, she didn’t have the time commitment to participate in mandatory races or show up at every team ride.

Yet, Patty had a longing to belong. When she showed up at her first cyclocross race in 2011 she realized she was the only one without a team affiliation. Drawing from her athletic apparel design background, she decided to create her own club. 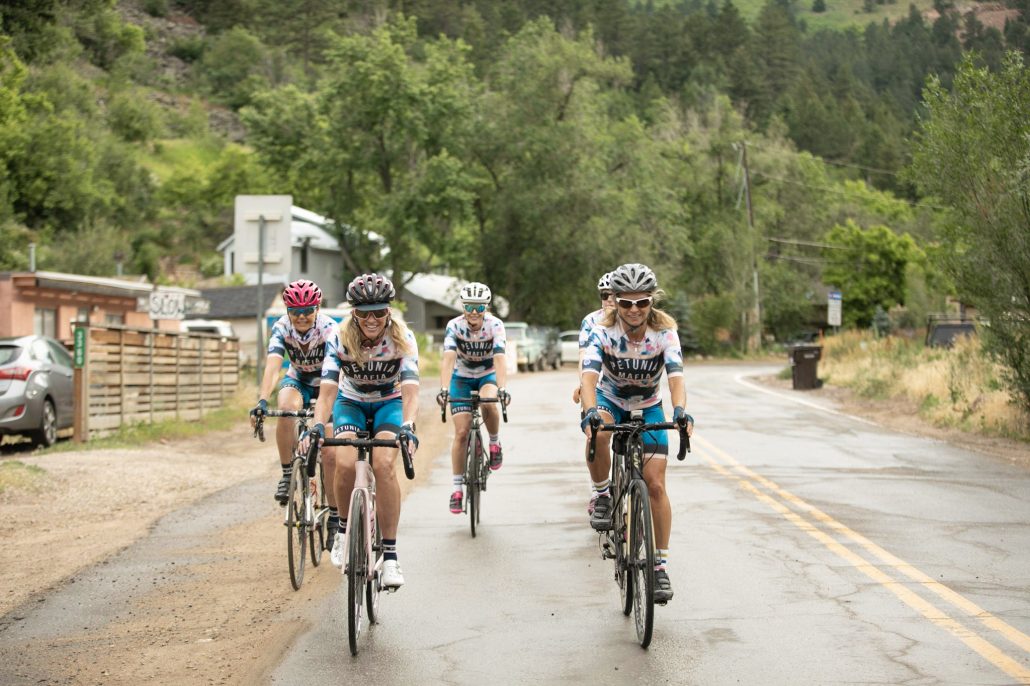 Patty’s design aesthetic encompasses all that is full of fashion risk: contrasting colors and bold layering of patterns, wrapped up in a sexy-feminine-sporty package. She wanted to create and be seen in a sassy yet performance-based cycling kit. Concurrently, she noticed a local business – ten20 Nail and Waxing Spa – had a bold and beautiful striped logo. That graphic had the design basis of what she envisioned.

ten20 Spa agreed to support the club as presenting sponsor and became the eponymous name: Team ten20 Cycling. Patty’s idea went viral like a shampoo commercial and what began with 5 friends is now nearing 400 members.

What inspired you to create Petunia Mafia?

I was new to Boulder and still enjoyed amateur racing and riding. I wanted camaraderie, reliable rides and to do so in a stylish, sassy, feminine way (let’s face it in 2009 women’s cycling kits left little to be desired).

My background is in athletic apparel design, and my nickname and our president’s childhood nickname is Petunia.

Why is it important for there to be female-centric cycling groups in Colorado?

Women juggle a lot. As a single mom of twin 3-year-olds, I found barriers in committing to another obligatory anything with all that being a busy modern woman entails – let alone turning a passion into a “have-to.” 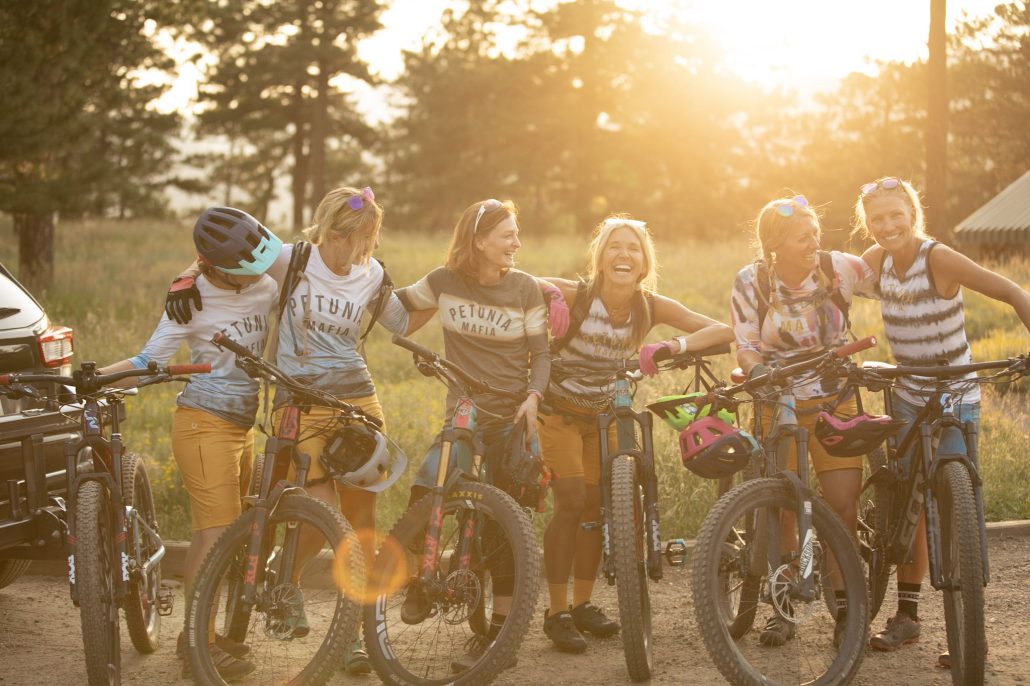 Most teams race and come with a lot of pressure and ego. Petunia Mafia asks for zero obligation from members, offers green/blue/black level road, gravel and mountain bike rides, all week at various times.

Women are social creatures. When we are on the saddle we talk about our kids, partners, jobs as much as we do our gears & chamois. But don’t let our sassy kits fool you. Those chats are often over 4+ hour rides to Gold Hill and beyond.

Who were some of your strongest female mentors growing up?

My mom. She was cloistered growing up as an only child who didn’t go to college or learn to ride a bike.

She married my father, a widow with 4 children under the age of 6 and when I was 9, I became a latch key kid while she got her degree and a job in computer programming. She also became a spiritual counselor, water aerobics instructor and eventually competed in the National Senior Games!

I think it’s ok to acknowledge most of my career was shaped by some outstanding men. The cycling industry is a cock ranch! My upbringing taught me that being confident and kind could take you anywhere even in an industry full of men. I knew I’d never be the fastest, prettiest, smartest one in the room but I have been 1 of 2 female directors at a board meeting filled with 40 men! 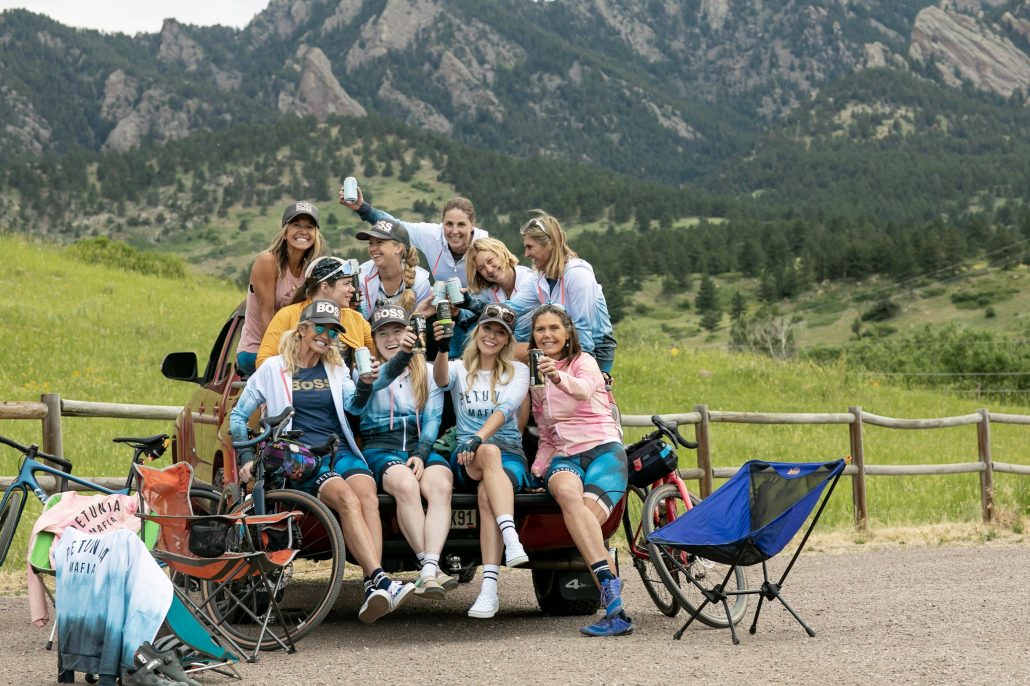 What are some other women-led outdoor organizations that continue to inspire you?

Brie Karl at Goal Five — “the sports brand for her.” Goal Fives exists to celebrate, elevate, and inspire female athletes. I hired Brie at Cannondale straight out of grad school. Hire people smarter than yourself, as they say — her brain and grit continue to inspire me.

Kristin Carpenter at Verde Brand Communications — a success in a male-dominated industry. She’s creative, beautiful, approachable, and gives back. Verde was founded in the outdoor recreation and active lifestyle markets 21 years ago.

What are you most excited about in terms of Petunia Mafia events or milestones for 2022?

Membership nearing 400 women, 7 trips, and over 400 rides anticipated in ‘22! That means we are regularly encouraging, educating, empowering women on and off the saddle.  Women make friendships for life on this team and research shows “every hour you cycle adds one hour to your life.”

What’s been your favorite part about partnering with BOCO Gear?

Kay Martin! We have in common growing up in big, direct New England with Catholic families.

Kay is so bright, yet so humble and so dang hilarious. She openly shares her failures and successes. She is a turtle. I don’t mean on the bike! She lets “stuff’ roll off her back. Kay has been a huge motivator in encouraging me to pave my own way in business.

Women Inspiring Women to Be Active

As Patty and the Petunias continue to inspire women to hit the saddle and clock impressive miles on the road, there are other women working hard to keep women active.

Inclusivity continues to be an issue that plagues all types of health clubs. The endurance running space is another area where women have been underrepresented, especially women of color.

Just as Petunia Mafia welcomes riders of all levels, Black Girls Run encourages women to lace up and get moving.